The Inuit: The Inuit used a variety of different tools and weapons in their daily life. They hunted animals and used materials from them, such as a walrus. They used its tusk made of ivory as a knife.

The Ulu: The ulu was made by women. They used a curved edged knife to chop through hard, frozen meat. It was cold in the Arctic and their meat got frozen, so they used a hard knife made of copper  to cut through it. The ulu was also made to skin animals. The ulu was much respected by women. After the first owner would die a close friend or relative would take it. It was said to possess knowledge from the past owner.

The Harpoon: Harpoons are ropes connected to spears. They have to be thrown with precise aim at the game being hunted and then pulled with the rope.It was mostly used for distant kills. The harpoon has been used for thousands of years and to the Inuit it was critical for survival. 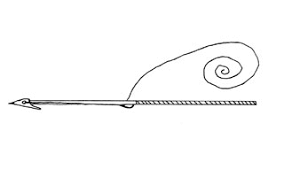 The Bow and Arrow: Bow and Arrows are used for exact aims. Even today people use them for fun and for hunting.

The Unaq and the Kavaik : These are also types of harpoons. Some harpoons are made out of wood or ivory, so they are all different.

The stone knife: This is a knife made out of stone as i presume you may have noticed. This knife is hard and used to kill animals. The stone knives are carved out of rock and and are very painful if you get hurt with them. Inuits also spent their time carving knives to utilize during their hunts.

When the inuit were fishing they would go on boats called kayaks. Those would be for one person only and they could quietly approach their prey.The tools and weapons that they used were to help them but they still respected the environment.

this is a harp seal. Inuit used to hunt these too.

2 thoughts on “Tools and Weapons”

Welcome to your brand new blog!

This is a sidebar and can be changed by going to Appearance > Widgets in your dashboard.